price from € 1.065
book now
Cycling on the Via Francigena
View Photos

Cycling on the Via Francigena

> > Home
> Cycling on the Via Francigena

Bike Tour: Cycling on the Via Francigena - 9 days

Cycle into a postcard landscape, rolling along Siena’s legendary dirt roads for kilometres. Traverse the Val d’Arbia and Val d’Orcia, icons of the Tuscan landscape. Stumble upon wonderful villages like Bagno Vignoni, with its enormous thermal pool on the square, and Radicofani whose fortress dominates all of southern Tuscany.

Once in Lazio, cherish the charm of lovely Lake Bolsena and the ancient cobblestones on Via Cassia, still intact after 2000 years. Viterbo welcomes you with an entire district dedicated to pilgrims, while age-old Etrurian roads lead to the Roman amphitheatre at Sutri. A peaceful bike path takes you right into the heart of Rome, running along the River Tevere to your final destination: St. Peter’s Square.

If you appreciate tasty food and wine, keep the following culinary stops in mind: the vineyards of Brunello di Montalcino wine, the dairy tradition based on Cacio di Pienza cheese and the excellent olive oil produced in the area between Bolsena and Montefiascone.

Route
Day 1: Arrival in Siena
Day 2: From Siena to San Quirico
Day 3: From San Quirico to Radicofani
Day 4: From Radicofani to Bolsena
Day 5: From Bolsena to Viterbo
Day 6: From Viterbo to Sutri
Day 7: From Sutri to Formello
Day 8: From Formello to Rome
Day 9: Arrivederci Rome!

Your journey begins in one of the Via Francigena’s loveliest towns: Siena, where Palio horse races date back to the 6th century. Devote this afternoon to strolling cobbled lanes, pick out the contrade’s coats-of-arms and climb up the Torre del Mangia to look out over rooftops. Cower beneath the Duomo’s black-and-white columns and, with a bit of luck, witness the precision of skilled flag-throwers. In the evening, enjoy a dinner of pici all'aglione on Piazza del Campo beneath the glowing lights on Palazzo Pubblico.

Hope for a sunny first day and unforgettable views from the Crests of the Val d'Arbia. Set off from Siena toward hills on the horizon, cycling the 'strade bianche' (typical dirt roads of the Sienese countryside) to the fortified village of Lucignano, with its fine church. At the gates of Monteroni d'Arbia, gawk at the sturdy fortified farm of Grancia di Cuna, which once garnered reserves of wheat for the entire Republic of Siena.

Push onward through Valle dell'Ombrone to Buonconvento, a 'happy fortunate place' accessed via a gate in the old town walls. Jump back on your bike, taking dirt tracks and paved lanes to San Quirico. Pause for sweeping vistas of the Val D'Orcia and hills scattered with vineyards and cypress trees. Interpret a blend of architectural styles at the gate of the Collegiata and stop for a well-deserved rest among verdant hedges in the 15th-century gardens of Horti Leonini.

Bid San Quiroco farewell, meld with a timeless world in Vignoni Alto and rejuvenate at hot springs in Bagno Vignoni. Test your strength on the short but demanding leg to Radicofani, and be rewarded with a fabulous view from the fortress. Leave time here to inspect the 13th-century gem of Pieve di San Pietro. After dusk, an evening stroll takes on a magical quality beneath illuminated monuments.

Move on to one of the Via’s most exciting sections, as the old Via Cassia cuts through a scene of infinite hills dominated by Monte Amiata. Take in the silence at the Romanesque crypt of Basilica del Santo Sepolcro and gaze up at ornate capitals and arches which, according to tradition, protect marble slabs bathed in the blood of Christ.

A first glimpse of Lake Bolsena signals the start of your descent into a volcanic crater, as you roll along dirt tracks through woodlands, meadows and olive groves. In Bolsena, curious Catholics will witness proof of the local 13th-century miracle of 'Corpus Domini' and foodies can sample traditional Sbroscia soup, made from tomatoes and freshly-caught fish from the lake.

Border the lake passing woodlands and olive groves and pause to savour the local extra virgin olive oil, scrumptious when combined with a bit of bread. In Montefiascone, a climb up to the Rocca provides boundless views. Then trek to a typical wine bar and order a glass of km-zero Est!Est!!Est!!!, made on site.

Spoil yourself a bit more with an optional stop at Bagnaccio Spas, recharge your batteries in its thermal waters then end your route in Viterbo. Honour the Via with a visit to the picturesque pilgrims’ quarter, admire the splendid Palazzo dei Papi and sit in silence at Santa Maria Nuova’s Longobard cloister. To end your day on a sweet note, celebrate with delicious local 'frittellacce'!

Head onward to Vetralla, the heart of ancient Etrurian territory, then cross lush countryside via Lazio to Sutri, a small town rich in attractions. The Roman amphitheatre is a must-see 'sculpture', dug right out of the volcanic tuff. Whether you view from the stands or take the stage, remember to sign the visitors’ register before you leave! Pause to reflect at Santa Maria del Parto, where well-preserved frescoes decorate the church walls and one of the images depicts pilgrims in prayer, complete with walking staffs.

Flanking the falls at Mount Gelato, you roll toward Campagnano, an ideal spot to stop for an invigorating paddle. A panoramic route through Veio Natural Park leads to Venturi, home of a 300-year-old yew called the 'Tree of Death', though its shade is not known to cause any harm! Back in the saddle, you face the final stage leading to the Eternal City. Breathe in the beauty of Veio’s wooded hills, as you cycle the enchanting Valle del Sorbo. Stop off to see its sanctuary and Madonna, as well as Formello’s old town and elegant medieval buildings.

The landscape around Lazio sits surprisingly close to Rome, yet its quiet atmosphere seems to be oh-so-far away. Navigate through traffic on busy roads to reach the pleasant River Tevere cycle path. Follow it ... all the way to the gates of Vatican City, where your cycling pilgrimage ends on St. Peter’s Square.

Celebrate with a triumphant photo in front of the Basilica, then replenish your energy with a well-deserved meal of spring lamb, pecorino romano cheese and perhaps a delicious maritozzo with cream. Yes, you’ve earned it!

Your cycling pilgrimage comes to an end this morning after breakfast.


A Bell is provided. 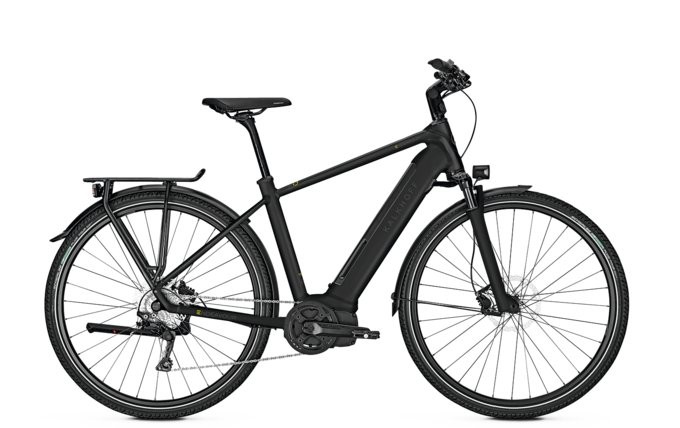 A bike to allow everybody to enjoy a day pedaling. Kalkhoff's frames join forces with Bosch's engines to give you a bike with top level reliability, amazing performances and incredible comfort. The electric engines powered by 36 V, 13,4 Ah (500 Wh) rechargeable batteries allow you to travel up to 150 km, so that you'll never be let down.

The bike for all seasons, ideal to travel on asphalt or white roads in the best possible comfort.

Tourist information on all the places of interest

From Bologna Airport (BLQ), you reach the central railway station, then take the train to Siena with a change in Florence.

From Pisa Airport (PSA), you take the train to Siena with changes at Pisa Centrale station and Empoli.

From Florence Airport (FLR), you take a public bus to Florence-Santa Maria Novella train station, then take either a bus or a train to Siena (both direct).

Train timetables are available on www.trenitalia.com.

Parking available at the hotel

Florence (FLR), Pisa (PSA) and Bologna (BLQ) airports are served by both major and low cost international carriers. All three airports can be easily reached by local transport, which is affordable and offers a frequent service.

On departure, the closest airports are Rome Fiumicino (FCO) and Ciampino (CIA).

From Bologna Airport (BLQ), you reach the central railway station, then take a train to Siena with a change in Florence.

From Pisa Airport (PSA), you take the train to Siena with changes at Pisa Centrale station and Empoli.

From Florence Airport (FLR), you take a public bus to Florence-Santa Maria Novella train station, then take either a bus or a train to Siena (both direct).

On request
Unavailable
Prices and Book  from € 1065 book now
Enquire

Previous Next
Cycling on the Via Francigena
Go to gallery

Previous Next
your tour specialist:

From Pisa to Florence, via Lucca and Vinci

Cycling on the Via Francigena

SloWays and its Partners ("We") use cookies to manage the website, to show you personalized content and to manage business goals. Below you can find more information on how we use cookies. You can accept all cookies, select them individually or reject them all. To learn more about our cookie policy, you can visit the dedicated page at any time

SloWays and its Partners ("We") use cookies to manage the website, to show you personalized content and to manage business goals. Below you can find more information on how we use cookies. You can accept all cookies, select them individually or reject them all. To learn more about our cookie policy, you can visit the dedicated page at any time